My daughter’s Halloween birthday party from a few years ago is filled with low-cost and DIY ideas!

Her birthday is just 5 days after Halloween, so she wanted everyone to get dressed up one year for her party. It was seriously some of the most fun we’ve ever had at a birthday party, and friends still talk about it!

Because it was a Halloween birthday party, I had to make her a haunted house cake! I just used whatever I could find in my pantry! 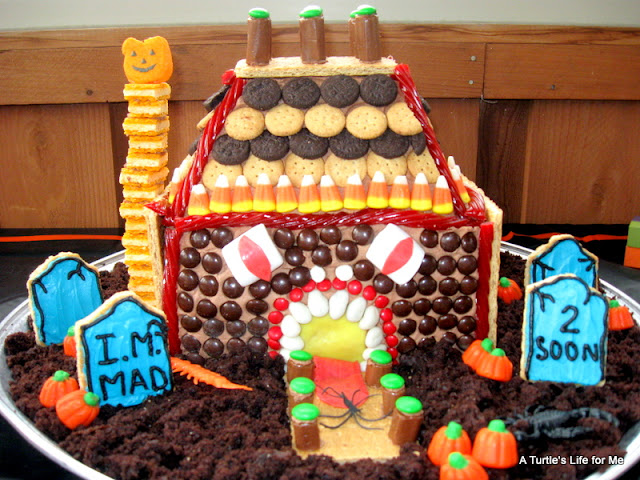 I just made about 6 (if I’m remembering correctly) square cakes that I leveled and then frosted and stacked.  Once they were stacked, I trimmed the top ones to make the shape of the roof.

The sides of the house have graham crackers sheets pressed up against them and then I covered the front in M&M’s.  The top of the roof is tootsie rolls with M&M’s on top.  The eyes of the house are marshmallows cut in half. The pupils, the tongue and the yellow door are all Laffy Taffy that I heat in the microwave for about 10 seconds and then roll out and cut with scissors to get the shape I want.

The tombstones are graham crackers that I cut and then frosted. The chimney is sugar wafers cut and then stacked with small dabs of frosting between to glue them.

I saved all the tops of the cakes after I leveled them and then I just crumbled that and spread it around for the dirt.  These are my favorite types of cakes to make and she loved it!

For games, we did the donuts on thread that they have to eat.

I bought packs of plastic body parts from the dollar store and then we had relay races where they had to put a body part on a spoon and race.

We did the mummy wrap with toilet paper and then had to race to the end and back (giant mess!!). 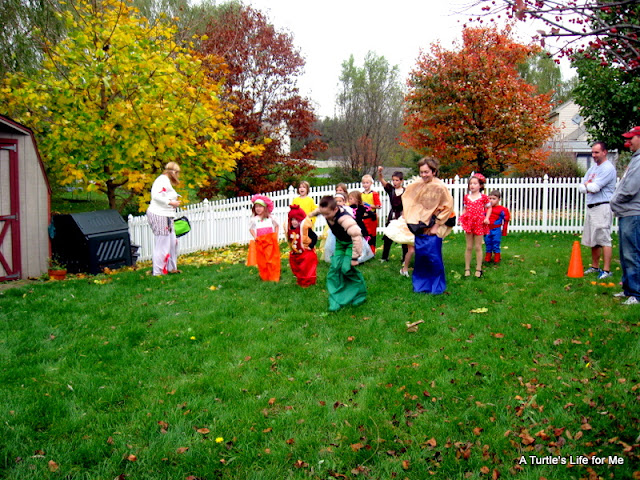 and the last part of the relay (no pic), they had to tuck a mini pumpkin under their chin and race down.

I also had a big inflatable witches cauldron and I tied white fabric around tennis balls to look like ghosts and they had to try to toss them in.

This is one of those ideas that seemed good in theory, but didn’t play out too well!  I found $1 paper lanterns at The Christmas Tree Shoppes and thought I could use them as pinatas.  I bought about 4 and decorated 2 as pumpkins, one as Frankenstein and one as a ghost.  The problem was that they were cheap and when I filled them with candy it was a bit more weight than they could support, so my husband (brave soul!) had to get in there and try to hold them. Yep, while the kids swung at this little thing. More than a few grimaces! 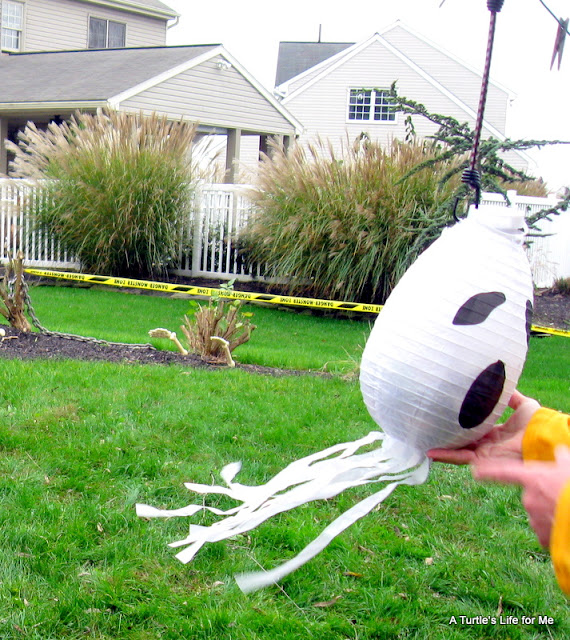 But he was a great sport like always and our daughter had a fantastic time! So much so, that she asked for another Halloween Birthday Party a couple years later! And since I can’t ever repeat anything, you’ll have to check out that post too for lots more ideas!