Like most of the country, we had a snow storm today, so I captured my little girl for some crafty time. We set to work on her Valentine’s… thinking this would take up most of the afternoon and not realizing that my big girl is (gasp!) 7 years old and good at this stuff! Like, really good. As in, comes up with her own tweaks and they work type of good!

I had picked up some mini candy canes last week for 10 cents a box so Little Emmaloo formed them into hearts on some plastic wrap (absolutely no wax paper in this house! Why did I have to run out today??). I melted some white chocolate chips with a little bit of vegetable oil. Once it was melted, I used a small spoon to fill in the opening and then she worked her magic with the sprinkles. 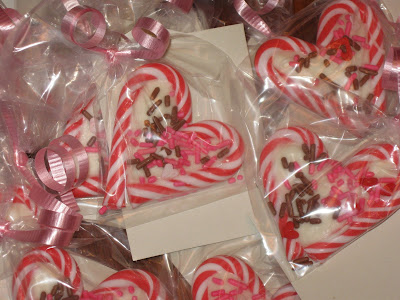 We let them set for a bit and then we wrapped them in some candy bags I found in my stash. I took some pieces of cardstock and she cut them into rectangles. I tried to talk her into hearts but she informed me that it would be heart overkill. I think she was right.

She remembered she had some stamps that would work and she did all the stamping and all the writing. I’m telling you, easiest Valentine’s experience I’ve ever had! shhh!!! I punched the hole, attached with ribbon and we’re good to go for a total cost of 10 cents!! 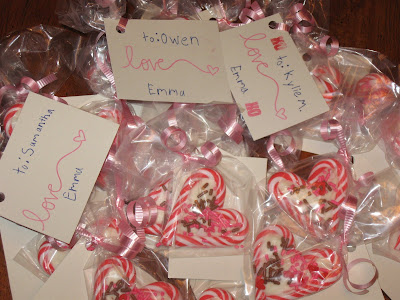 I originally saw the idea in Family Fun, but their’s were lollipops! FUN! We decided against the sticks because that just wasn’t the size bag I had. We also didn’t heat the candycanes up in the oven because they just didn’t need it. Once the chocolate hardened, it held them together just fine! And now we need to think of something for my 9 year old son to do, because he just wasn’t feeling this one!